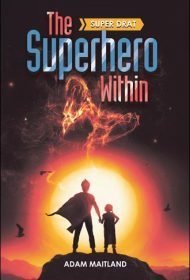 The superhero of Adam Maitland’s charming fantasy for young readers is not the traditional, run-of-the-mill comic-book hero, but a child with special needs who teaches readers important lessons.

Dexter has always had trouble controlling his physical and mental impulses. He admits that his attention strays; his body doesn’t always respond to commands from his brain; he has a hard time listening because he doesn’t always hear words in the correct order; and he often loses himself in a world of fancy and fantasy. Here, however, these characteristics aren’t deficits, but grist for a compelling story where his supersensitive hearing becomes a magical power and his tendency to live in his imagination triggers an epic adventure.

Dexter’s superhero alias is Super Drat (for Determined, Responsible, Assertive and Thoughtful). He invites readers on a participatory mission to a faraway “Island of Great Inventions,” where they’ll enlist the aid of magical dragons to face off against the minotaur Creepo for otherworldly rewards.

Maitland consistently addresses readers directly, enlisting their aid for helping Super Drat overcome obstacles, working with allies and countering foes. At one point, readers are even allowed to decide which of two dragons to call on for help; their choice determines which page they next turn to in order to advance the story.

The book features charming illustrations depicting Super Drat, the dragons and magical creatures readers meet along the way. Throughout, Maitland—a teacher who holds a master’s in special education—imparts messages about self-worth, self-confidence and acceptance, as well as how to handle difficult situations. For example, he reminds readers, “If we get upset, we have to do our best to take deep breaths, calm ourselves and focus on making this mission successful.”

The adventure is straightforward, but varied and fantastical enough to satisfy young readers. Ultimately, though, it’s the broader, deeper messages about self-worth and determination that make this book a valuable asset for children, parents, educators, and counselors.