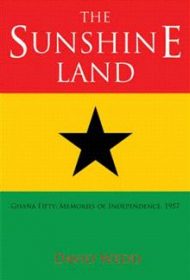 As David Wedd recounts his year-long service as a 20-year-old junior British officer in this engaging book, the sensitive writer’s love for the land and the Ghanaian people shines through on every page.

When Wedd arrived in December 1956, Ghana was still called Gold Coast, a locale he selected due to a passion for entomology. A fine storyteller and photographer (he includes nearly 60 photos), Wedd paints a fond picture of his life in two communities: his British battalion and the Africans with whom he related closely.

While the narrative would benefit from an overarching theme, or foreshadowing to build anticipation, the book never drags, and Wedd effectively portrays his experiences as a naive Intelligence Officer, describing characters with such equity that readers sometimes cannot discern which are British and which are African. His first-hand account of the country’s March 1957 independence celebrations, including new Prime Minister Nkrumah’s speech before joyful thousands, has immediacy, if little factual context.

Throughout, dialogue in the pidgin English that is the lingua franca for colonialists inserts humor and acquaints us with some of the cheerful people of “the sunshine land,” as when crabby Sgt. Christian challenges Abongo, an orderly, for eating while other orderlies are working. Abongo responds, “Dey chop [their meal] done finish. I tink, Sargy, be time for yourself chop.”

At his service’s end, Wedd and a Ghanaian friend trek north to Timbuktu with a nebulous itinerary yielding joyful results. In a long postscript, Wedd mentions that he went on to attend Oxford and teach, and relates return trips to Ghana in 1968 and 1971, recounting how his Ghanaian friendships evolved and how the first British colony to gain independence was faring.

Wedd clearly relied on thorough journals to describe specifics like birds and insects he identified, yet he deftly avoids the common memoirist mistake of including superfluous detail. Readers who enjoy history – British, African and natural, alike – will find much to enjoy in this fine memoir.