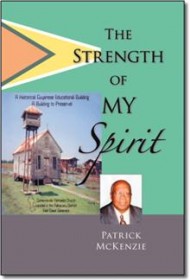 A young boy overcomes an impoverished childhood in rural British Guiana to become Chief Agricultural Officer of independent Guyana in this engaging memoir.

In 1931, author Patrick McKenzie was a happy, well-loved boy, living in a village with no running water, electricity or proper medicine. “Puncture wounds were filled with soft grease… a lighted match held over the opening,” McKenzie writes. Encouraged by his parents to attend high school, he ventured into the world. Dogged determination led to graduation, a move overseas, a degree from Tuskegee Institute and a victorious return as a veterinarian. During his journey, the author overcame poverty, British colonialism and “unabashed” American racism.

McKenzie’s struggle mirrors his country’s fight for independence from British rule and its attempts for financial stability and worldwide political relevance. He participated in this challenge as a Senior Minister of Agriculture and as a Member of Cabinet. After years of dedicating his life to his country, he chose to “move to an atmosphere of hope on the personal level” and emigrated to the U.S., where he rebuilt his life from the ground up.

This book is at its best when personal stories of village life and rural veterinarian mishaps are at the forefront. His tales of accidentally cutting off puppies’ tails instead of their dewclaws or wading chest deep in the Canje Swamp make for entertaining reading. The story is hampered by the author’s insistence on including too many bit players in his life. In addition, his recitation of his developing country’s political strife is likely to drag for everyday readers, although students of international politics will enjoy the insider knowledge of Guyana’s struggle to take its place on the world stage.

Overall, this is a fascinating story about a place and time unfamiliar to most. Readers who endure the dry chapters about Guyana’s political upheaval are sure to be rewarded by the author’s entertaining personal stories.

BlueInk Heads-Up: Librarians will want to consider this for their collections on British Guiana and independent Guyana. This would also be a nice book to display during Black History Month.