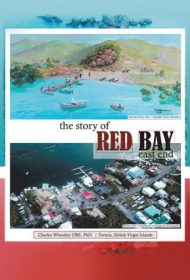 In The Story of Red Bay, East End, author Charles Wheatley explores the history of a beautiful parcel of the world often overlooked by modern travel writers.

Red Bay, East End is located in the Virgin Islands. The name originates from the prominent red rocks that once surrounded it, which served as a directional beacon for sailors.

The slim book is divided into brief chapters that cover a somewhat vague time span: Chapter 1 is titled “Red Bay Before 1956; Chapter 10, the final chapter, is titled “Twenty-First-Century Red Bay.” The text is accompanied by photographs, colorful illustrations and maps.

Wheatley writes that Red Bay used to serve as a prominent market, where hauls of fish were sold to local citizens. The dock was a transportation hub where local citizens caught boats into nearby Road Town for church services and other activities, and the hustle and bustle of the area provided a source of entertainment.

As time passed, the water became polluted, due to industry, and swimming is less common; fishing boats “have given way to yachts and speedboats”; the red rocks have been buried or dynamited for various projects. “As I travel along Red Bay daily,” writes Wheatley, “I lament the changes that have taken place. Red Bay has lost almost all of its original identity.”

Wheatley writes simply and clearly, occasionally offering fun details: “If your shirt lost a button,” he reports at one point, “you could pick a thorn from a nearby cactus hedge growing among the rocks and fasten the shirt together.” But the author’s discussions often omit the exact years that apply, leading to uncertainty about what happened when. And the topics seem hit or miss; the book feels more like an extended pamphlet than a robust, fully researched history of the area.

In short, this is a casual, breezy read. It might appeal to Red Bay locals or tourists looking for a quick glimpse into the area’s past.