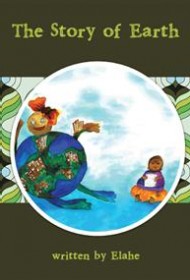 The earth depicted on the cover of this picture book looks jovial and kind. But as the story begins, Earth turns dark and vengeful, spewing volcanoes to punish humans for polluting her and warning that she’ll destroy herself if humans don’t stop.

Author Elahe uses frightening information to spur readers to save Earth. Though Elahe’s goal seems to be environmental awareness and her apparent limited register of English may have altered her intended message, the story comes across as threatening and may confuse children with questionable science.

As the story begins, Earth tells readers that volcanoes erupt because she’s upset with people and that if she gets angry enough, she’ll “annihilate” herself. (No mention is made of the real role of volcanoes in releasing pressure in Earth’s mantle.) Then, Earth states its grievances against humans, among them, causing the ozone hole.

Elahe’s facts are at times disputable. For example, Elahe writes that the ozone hole “is getting larger and larger every day,” even though the United Nations reported last year that the hole is getting smaller. Later, while correctly stating that ozone helps absorb the sun’s rays, she incorrectly writes that it keeps “sky bodies” from hitting her.

Elahe also makes a questionable claim that the atomic bombings of Japan put a hole in the ozone, when scientists generally agree that chlorofluorocarbons are the main cause. She also omits facts that could provide a more complete picture of global warming.

Unfortunately, the story’s misinformation overshadows the vibrant watercolors of illustrator Fatima Hassannezhad, whose images include sumptuous blends of color.

In the end, Elahe’s story does more to inspire fear and promote false information than to encourage hope and environmental action. It’s also difficult to follow because of typos and incorrect English. Adults should review this book before passing it on to children and follow up with a science-based discussion of environmental concerns.