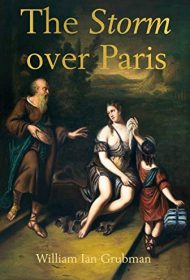 William Ian Grubman’s novel, The Storm over Paris, is a suspenseful story that plunges readers into the deadly darkness the Nazis cast over occupied Paris during WWII. It recounts the struggles of renowned art dealer Mori Rothstein, a Jew who has been forced to participate in Reichsmarschall Hermann Goering’s plundering of master paintings to stock Hitler’s personal museum.

To save his family from certain execution or death in a concentration camp, Rothstein agrees to use his shop to identify the finest masterpieces for der Führer, but he and his son Émile, himself a brilliant copier of great paintings, devise a scheme to save the best of the best from Goering’s clutches. Still, Rothstein and his family know it’s only a matter of time before his usefulness comes to an end. Somehow, they must escape the fate that he knows is coming.

Each page brings yet another struggle as the tale speeds to a final, seemingly impossible challenge. Using an economy of words and displaying a command of images, Grubman rises to the challenge of such a fast-paced novel, infusing the story with an aroma of suspense and fear: “The gallery door opened and Mori felt a pair of eyes looking at him before he saw the silhouette in the doorway. His stomach lurched, and he jumped to his feet. Although he couldn’t make out the details of the shadow blocking the stream of early morning sunlight, there was no mistaking who it was. How long had Goering been standing there?”

The characterizations are deep and complex, the author accurately draws on historical events to frame the story, and Grubman’s expertise as a connoisseur of fine art often shows through.

Readers who aren’t acquainted with Paris’s neighborhoods are advised to follow the plot with a map of the city nearby for reference as Grubman wades into a well-trod genre, delivering a fine novel that will appeal to anyone engaged by this tragic past.