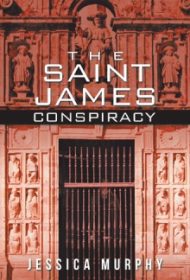 Author Jessica Murphy spins a byzantine biblical thriller that attempts to answer one of history’s most enduring mysteries in The Saint James Conspiracy.

The novel’s hero is MacKellan “Mack” Kirby, a semi-retired history professor recently returned from studying the Quhram scrolls, ancient documents better known as the Dead Sea Scrolls. After discovering a shocking clue about the life of Jesus Christ, Mack summons his niece Fiona and nephew Joe to assist him on his quest to unearth a previously unknown biblical testament.

Simultaneously, the novel introduces several antagonists: There’s the cartoonish Archreverend Claude Mathieux, leader of a powerful South Carolina megachurch, who is tracking Mack’s team. The church, improbably, funds itself with an Internet company, Dawning Day, equivalent to Google. The more interesting character is Mathieux’s fixer, Sam Wardell, an ex-CIA mercenary who happens to be Fiona’s ex-lover.

In interstitial chapters, the author travels back in time to unveil the roots of a biblical conspiracy in painstaking detail. These interludes start in Jerusalem in 36 A.D. with the Crucifixion before leaping forward to 11th-century Spain. Here, an uneasy bishop translates a mysterious testament before hiding it away in the cathedral of Santiago de Compostela, where all parties converge at the book’s denouement.

If this sounds like Dan Brown’s The Da Vinci Code, the author knows it, as her characters name-check the book repeatedly. Like that novel, this story ultimately points toward a stubborn conspiracy theory about The Priory of Scion, a shadowy collective thought to be the descendants of Jesus and Mary Magdalene.

Murphy’s writing is serviceable, if exposition-heavy, but the plot relies on too many deus-ex-machina devices, including the unlikely connection between Fiona and Sam and the influence of Dawning Day. Still, readers who enjoy the likes of Brown, Steve Berry, or Raymond Khoury will find similar pleasures and challenges here. Although largely based on the notorious pseudohistory Holy Blood, Holy Grail, Murphy has clearly done her homework to make the case for her controversial, if derivative, historical adventure.