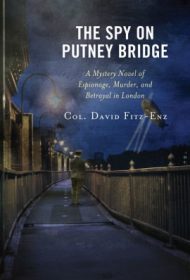 In 1945, an Englishwoman named Charlotte Stetchworth tells her story to her grandson Freddy. In the 1890s she falls in love with a German aristocrat and bears his child, but her mother hates Germans, so Charlotte is “shackled” to the bald and dull Marcus Stetchworth, whom she detests and eventually poisons.

Encouraged by her lover, she betrays her country in favor of Germany and recruits her son Roland Augustus Grayling Stetchworth, aka Rolly or Rags, to do the same. “Your father and I were German spies,” she tells Freddy. The idea is for Rolly to become embedded in the British military and then pass along any useful intelligence. As he gains trust at the highest levels, he learns valuable information, from ship and troop locations in WWI to the date and landing place of D-Day in WWII. British Intelligence eventually suspects a mole, although some consider it “impossible that an Englishman could spy for the Germans. Un-British, you know.”

This is a smooth read filled with interesting details about such events as the disastrous battle at Gallipoli in Turkey and the Zeppelin bombings of London, both during the Great War. Charlotte’s motivations are believable given her resentments and desire to please her lover. And Rags begins under his mother’s influence, but over time becomes a more complex character.

Oddly, though, for a story involving danger throughout, the narrative lacks tension. If Charlotte and Rolly ever experience gut-wrenching fear, it doesn’t come across strongly to readers. Thus, this is not a page-flipping experience.

Rather than a suspense story, this reads more as a historical novel—one that conveys an authentic feeling for the era and looks at the European wars through the eyes of a traitor. As such, fans of historical fiction may enjoy it more than those seeking a thrilling story of espionage.