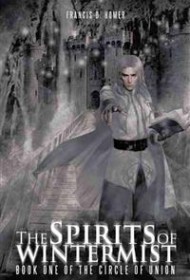 Francis D. Homer’s The Spirits of Wintermist is the first in a series, but stands alone as a self-contained high fantasy novel. It is, at its heart, a siege story, recounting all of the events revolving around and building up to a battle between outside invaders and the inhabitants and defenders of Wintermist’s school for wizards.

The narrative (eventually) focuses on two main protagonists: Duncan, a sort of reluctant folk hero with a nagging sense of survivor’s guilt, and Anton, a young wizard who finds himself thrust into a position of unique responsibility. Many others fill the roles of mentor, sidekick, villain, or romantic interest, but they come across less as full characters than as a chorus for these would-be heroes.

The Spirits of Wintermist is probably best situated alongside other role-play-inspired sword and sorcery novels, particularly from the ‘80s and ‘90s, which, taken as a whole, constitute a genre of their own. At their best, these novels are capable of transporting non-gamers into richly imagined worlds with compelling tension and sympathetic characters (think of works by Margaret Weis, Raymond Feist, or RA Salvatore). Unfortunately, Francis D. Homer’s writing doesn’t quite take us there.

The world around Wintermist is sufficiently drawn for purposes of plot, but not textured enough to provoke the reader’s imagination. The characters wear their conflicts on their sleeves and, with one important exception, seem to have little personal history to provide context. This is reflective of the main problem in the story: there is little tension to be found. Yes, there is an invasion and some vaguely described political maneuverings, and yes, lives are threatened. But the meaning of the outcome for all involved remains as elusive as the characters’ wants and desires. That drains much of the impact this story might otherwise have had, leaving a read that’s unfortunately too flat to compel its audience onward.