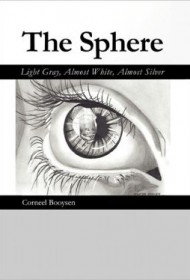 The people and places in The Sphere are as elusive as the “Light Gray, Almost White, Almost Silver” of the subtitle. Characters have only first names. Countries — the protagonist, Victor, is from Azania — are unfamiliar. Even the time frame — travel is by horsecart and sailing ship, streets are cobblestone, yet mysterious “spheres” soar many stories into the sky — is impossible to pinpoint.

What is clear is that Victor and his family are strangers in a very strange land. They’ve left their home seeking a better life, that oldest of reasons for upending one’s world. But their new life is one of poverty and estrangement — until a neighbor invites them to visit the local sphere, a building that dominates the landscape.

There, they find fellowship, music, children’s programs, study groups focusing on sacred scrolls, and a new way of communication — “lovingspeak” and “happyspeak.” As Victor notes, “They gave me what I wanted, a place where I felt I belonged. I would have moved heaven and earth for them.”

Can you say megachurch?

In fact, Booysen’s author’s note explains that his family joined a religious group when they relocated from South Africa to America in 2003. It gives no details beyond that — but Victor’s experience in the sphere, with increasingly autocratic rulers, ever more onerous demands for money, and bizarre interpretations of scripture provide a hint.

Grammatical glitches and lifeless dialogue hamper Booysen’s otherwise well-paced writing. Steeped in despair and dread, it pulls readers along with Victor as he struggles to come to grips with the influence of the sphere, knowing that his personal defiance could bring harm to his family.

The themes in The Sphere resonate at a time when citizens in several countries are rebelling against repressive regimes. “Write it down,” Victor is told. The Sphere bears witness.