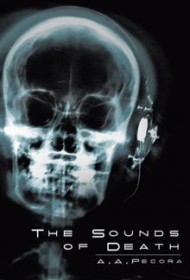 It’s easy to tell that first-time novelist A.A. Pecora, a retired doctor, is a fan of classic detective fiction. In The Sounds of Death, his protagonist, former cop-turned-private-eye Cody Thomas, is quick to notice the smallest details of a crime scene, a la Sherlock Holmes. Thomas isn’t as hardboiled an investigator as the Continental Op or Sam Spade, but he’s modeled after them. Pecora tries to echo the clipped, descriptive prose of classic, hard-boiled noir authors such as Raymond Chandler and Dashiell Hammett.

The story opens with Thomas surreptitiously recording his client in a hotel room, apparently having sex with a woman. He was hired to follow the man’s wife, but Thomas decided to shadow his client instead when the wife turned out to be clean. He goes home after the unknown woman leaves his client’s room.

The next day, his client, an attorney with some seamy underworld connections, is found dead in the hotel room, and Thomas offers to help his former partner, Lt. Andy Perone, investigate the murder. But all hell breaks loose when the woman Thomas recorded in the room turns out to be his own wife, who’s now the prime suspect in the murder.
It’s an unexpected twist, but unfortunately, it’s also an unbelievable twist, because the wife’s character and back story aren’t developed well enough for the reader to understand her involvement with the victim. And there are too many non sequiturs and clichÃ©s throughout, such as this description of a scene in a law office: “A few minutes later, a strikingly attractive blonde with a magnificent figure appeared, as if Scotty from the Starship Enterprise had beamed her down.”

At least one more unexpected twist turns up by the end of The Sounds of Death, but lack of character development and clunky language ultimately dampen the enjoyment of the book.