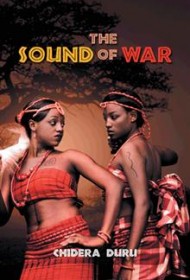 It’s astonishing that a 19-year-old Nigerian college student could produce a 360-page novel over the summer following his sophomore year. It’s less surprising that Chidera Duru’s writing needs work. The Sound of War is rife with misspellings, grammatical errors and bewildering prose: “Most of the chiefs wore their faces like excreta that had been beaten by the rain.”

But the saving graces of this precocious book more than compensate for the seeming haste of a tyro author. For one thing, its complex tale of cultural upheaval, civil unrest, love and redemption in southeastern Nigeria provides a fascinating glimpse–particularly for curious and open-minded Western readers–into the mysteries of Igbo tribal culture, from which the Duru family comes. For the Igbo, the “great spirit” is Chukwu. In Duru’s story, it is this supreme god who presides over both the fierce kinship battles and unfettered dance celebrations that erupt when a newly-crowned regional king upsets the communal balance of his people with a series of tradition-crushing “reforms.” Duru focuses primarily on one troubled village whose ancient matriarch, Chioma, seeks to protect the town’s ancient religious monuments and rally the villagers against the torrents of change.

The book may have limited appeal beyond West Africa, but this passionate look at the Igbo (sometimes called “custodians of the conscience”) reveals a people as concerned with family honor as with the cultivation of their staple crop, the yam; as dedicated to each other’s well-being as to the elaborate ceremonial masks and Highlife music for which they are known elsewhere–if they are known at all. The love story of beautiful young Isanu and the rebellious Onyema is especially poignant, and inevitably doomed to tragedy.

For now, Duru continues to study microbiology at Nigeria’s Imo State University. But he is clearly a writer in the making, and the literary world should be on alert for the emergence of a vivid and committed new voice from Africa.