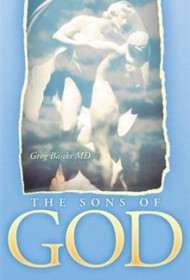 The Nephilim were on the earth . . . when the sons of God went to the daughters of men and had children by them. This enigmatic passage from Genesis is the basis of the book, The Sons of God. Banks spins an intriguing tale set in modern times where, through the scientific advances of genetics, a master race is being birthed.

Adam Martin is a young OB doctor who, after turning his back on being a medical researcher, wants nothing more than a simple life back in his hometown. He purchases a quaint farmhouse and even begins a relationship with an old flame from high school. All does not go as planned for Adam, however. For one, the old girlfriend is practically engaged to another man. He also begins to notice that many babies are born unusually large. He finds an opportunity to surreptitiously study the DNA of one fetus, and what he finds shocks him. Somehow, the DNA has been arranged to produce a human much larger and smarter than normal—practically a god.

Adam soon finds he has tapped into a plot much larger than he can imagine—a secretive cult, death threats, abductions, missing women. He unwillingly enters a race to discover the truth.

Banks effectively blends religion and science in this thrilling page turner. He has researched thoroughly and communicates scientific concepts in an easy-to-understand manner. The narrative arc is laid out well, with multiple plot lines unfolding as the story progresses. Unfortunately, the manuscript lacks a thorough copy edit. Sentences are awkward and words are misused, as in the unappetizing “sweat tea” characters drink on p. 54 and the mention of the Renaissance artist “Michael Angelo” on p. 183. This book has a chance at excellence if the author sees that it gets a thorough re-edit.