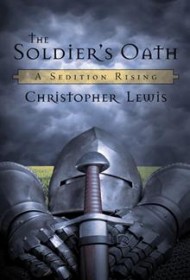 Christopher Lewis recently served in the U.S. military, and the young author has used that experience to animate his first novel. It fairly bursts with Lewis’s memories of boot camp (“This is the sorriest pile of crap I have seen in my life,” an army trainer shouts at his clumsy recruits); the bonds of brotherhood (“ . . . now let’s live up to it and give ’em hell”); and devotion to country, no matter how prosaic the duties (“We are assigned to crowd control and door security”).

At the time, the Holy Roman Empire prevailed over Europe, the Medicis were sitting for portraits by Titian, and Henry VIII was busy decapitating his wives. There’s none of that here. Instead, the book’s strapping warrior-hero, Captain Arathin Briar, awakens to the unlikely scent of hot breakfast and declares: “Yum, it smells great.” Arathin’s beautiful wife, Eva, is similarly catapulted over the centuries: “I swear,” she chides, “you’re such a pain in the butt sometimes.” Readers may be willing to forgive some poetic license, but anyone writing a period piece must pay heed to historical detail and language — even a novice. Alien to its own milieu and devoid of satire, Lewis’s book falters.

The vague geographical setting is an unnamed land ruled by a corrupt tyrant, and the plot is stuffed with soldierly codes, royal conspiracies and moral sleaze. But for some reason, Arathin simply vanishes from all that melodrama with 40 pages to go.

He’d be better off in the 21st century.