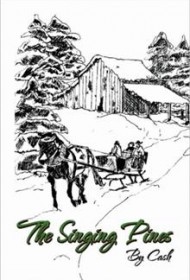 Author Cash (pen name), notes on the back of his book that his coming across some deserted logging camps in Canada’s north woods inspired this sprawling debut novel about early 20th century logging.

Fran, a young half-breed mother who was recently widowed when a logging accident killed her husband, activates the plot. Unable to support herself and young son Abner, she seduces Cliff, the camp boss, so that he will give her boy a job.

Cliff transfers the cook’s assistant elsewhere to give Abner a camp kitchen job, but things immediately turn deadly. The angry cook deliberately scalds Abner with boiling water. When the cook is dismissed for his action, Fran nurses her son and becomes the cook herself.

As the story progresses, Fran’s story fades to the background for much of the time as other plot threads surrounding life in the logging camp surface. Themes include: greed on the part of company management, challenges to regulations and laws made by the railroads and government concerning logging and cutting profits, romantic intrigue, and so on.

A dizzying cast of characters enter the story, marry and have children as the tale moves into the 1940’s, but most are not developed enough to command reader interest. Numerous forays into side issues impede the plot flow and blur the focus. In addition, sex scenes are blunt and crude, lacking any semblance of romance, and women often are little more than objects for male pleasure.

Cash’s incorporation of political, environmental and cultural issues lend authenticity to the story, but many of the plot threads would be better saved and developed into future novels.

Records of early logging camps in historical archives offer a wealth of information. With its many punctuation errors, contrived subplots, anachronisms and simplistic language, this novel lacks that wealth. As a result, most readers will become disengaged early on or skim the story for passages of personal interest.