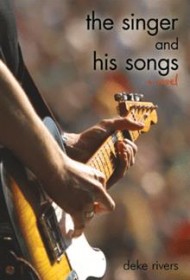 Deke Rivers’ novel, The Singer and His Songs, follows the enormously successful career of its protagonist, a rock musician.

Born in Estonia and later living in Australia, Chris Wild picks up an electric guitar early and joins a teenage band. He leaves the band when his family moves to Canada and is eventually discovered while working in a recording studio. Worldwide superstardom follows. Along the way, he finds himself torn between the love of two women, April and Sarah.

Seemingly without exception, everyone adores Chris’ music. He’s welcomed as a superstar from the first moment he performs; in fact, an early audience encourages young Chris to perform six encores. He also appears to be irresistible to women.

Chris’ career hits few significant snags, so for most of the story, the only notable conflict, outside of some record-label troubles, concerns Chris and the two women, who worship him. In the last third of the story, a bizarre plot twist appears involving a hit man who goes by the name of “the Taipan.”

The Singer and His Songs is credited to Deke Rivers, the same name as a character played by Elvis Presley in the 1957 film Loving You. Presley is often mentioned in the book, which has been meticulously proofread (outside of some recurring capitalization quirks, such as always capitalizing “family” and “fate”).

A practically flawless main character rarely makes for interesting storytelling, and Chris is no exception. The novel’s first paragraph describes Chris as a “living legend” and “the world’s greatest singer, composer, guitarist, and entertainer”; similarly glowing sentiments are repeated throughout. Additionally, the dialogue is often contrived and repetitive, and the author often uses multiple adjectives when one (or none) would be preferable.

To the author’s credit, The Singer and His Songs is cleanly written. Unfortunately, the lack of conflict derails the novel’s appeal, creating a story that fails to engage overall.