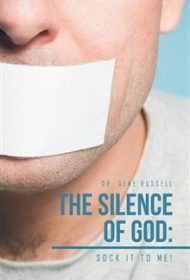 In the universe of self-help and self-awareness literature, personal testimony resonates with readers. Following that path, Dr. Gene Russell felt called in The Silence of God: Sock it To Me! to compile the steps that he took during his personal journey during times when he felt God was silent.

A pastor, businessman, community leader and avid traveler, Russell uses his life experiences to answer the specific question: why is God being silent? His explanations, along with examples of people he has known and biblical figures, serve to examine the issue. Also, he has done ample research, and provides readers with a respectable bibliography and set of endnotes.

Russell freely admits that at age 57, after many happy years in the pastorate, he reached a place where he felt an unexplained silence from God. Deciding that his burnout was a result of overload, he embarked on a new career in the insurance industry. He acknowledges that his success in that industry still left him hungry for the answer to his question. Remaining true to his faith, he continued on his quest for answers, not only by soul searching but also by looking outward to see if this silence was a part of the human condition.

Russell makes some interesting points, and his sincerity rings true throughout the book. But the narrative tends to get weighed down in repetition and in the frequent use of the passive voice. (“An early retirement was taken”; “Perhaps from Divine signals God’s awareness was made.”) In addition, the author spends several chapters on the proof of the existence of God, which seems odd, given that if God’s existence were disproven, this would negate the entire thesis of the book.

Russell’s proposition that walking a difficult journey can produce what he defines as “marks on steel” (basic truths) may give some readers valuable food for thought. But overall, the text would benefit from comprehensive editing.