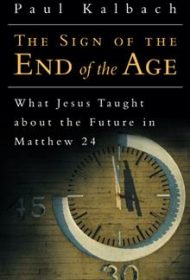 Eschatology is the branch of theology dealing with the final events of human history: in other words, the end of the world. Here, Paul Kalbach presents a line-by-line examination of a single chapter in the Gospel Matthew that the author maintains is chockfull of details about what is often called the End Times.

Inspired in many ways by Marvin Rosenthal’s The Pre-Wrath Rapture of the Church (published in 1990), Kalbach looks to illuminate the Olivet Discourse, a prophetic passage found in different gospels that describes a time of great suffering for God’s chosen people. He argues against many theories, including the pre-tribulation reading of scripture which maintains that the Rapture—a prophesized moment when devout followers of Jesus, both living and dead, will be taken into the sky and united with Christ—will occur before Jesus’s Second Coming. Kalbach respectfully contends that this position is wrong, arguing instead that the Rapture will occur “right after the great tribulation [a period of intense suffering], right at the Lord’s glorious return (Matt. 24:30), and just before the wrath of God is poured out in the day-of-the-Lord judgment.”

If this sounds difficult to follow, that’s because End Times theology is often confusing and seemingly steeped in minutiae to the uninitiated. Yet, Kalbach is devoted to his subject and offers readers background, etymologies, and historical context to illuminate the timeline of Christ’s Second Coming.

Still, much is expected of readers here: a firm grasp of the Old and New Testaments, an astute understanding of eschatological vocabulary, biblical history and much patience (Matt. 24 is less than 1,200 words; Kalbach’s exegesis on that chapter is over 144,000 words). This doesn’t mean the author hasn’t presented his material with competence: His prose is clear and his arguments, while lengthy, seem logical.

While not written for general readers, Kalbach’s prodigious commentary may appeal to some evangelical Christians interested in learning more about premillennial views of the eschaton.