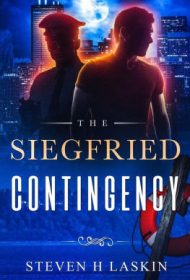 Dark forces from the past threaten a rebirth in this fast-moving thriller by Steven H. Laskin.

Carl Traeger is a mild-mannered Seattle bookstore owner in the mid-1970s. So he’s shocked when an intruder points a pistol at him and makes a strange demand: “You know what I’ve come for,” the goon says, although Traeger has no idea what he means. Thinking quickly, Traeger turns the tables by throwing a cup of piping hot coffee in the man’s face.

Traeger’s great-aunt Sophie has recently died after naming him sole heir to her estate. A letter she left him reveals that his uncle Rolf was a Nazi and had bequeathed him an old copy of Faust in the original German. Now, certain people want the book badly enough to kill for it—thus, the aforementioned visit. “There is evil connected to that book,” Sophie’s letter says, and indeed there is.

As Traeger faces increasing danger—“if you don’t give it to me now, you won’t live to see tomorrow”—his quick thinking gets him through one potential disaster after another. Meanwhile, divorced and gay, he becomes romantically involved with investigating officer Randy McCutcheon. Together, they find a document hidden in Faust’s binding that reveals an eye-opening secret about Adolf Hitler with major implications for present times. Even if the document isn’t genuine, it could gain frightening credence.

Everything fits together in this well-conceived and executed plot. The scenes never sag, yet there’s still enough background to make readers understand and sympathize with Traeger. In clear, straightforward prose, Laskin puts his hero through tribulations and nasty surprises that will keep readers turning pages. Even those who find the premise and action a bit implausible (a typical hazard with thrillers) will happily suspend disbelief to see how the story turns out.

In sum, The Siegfried Contingency is a satisfying thriller that should please a wide audience.