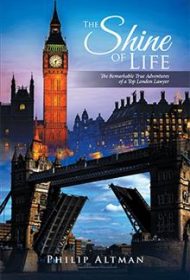 Over a half-century, Philip Altman became one of the most successful lawyers in London, specializing in property law. Now retired, Altman offers this brief memoir to share some of what he learned along the way.

During his career, Altman worked for several firms and in private practice, representing well-known personalities, British trade unions and members of both houses of parliament. In what may have been the pinnacle of his career, he was personally approached by Prime Minister Tony Blair to oversee the acquisition of a property for the Labor Party’s new London headquarters.

Altman’s book includes not only the highlights of the author’s decades as a lawyer, but his beginnings, education and personal life. His reminiscences are brief and enjoyable, and when he discusses cases he was involved in, he avoids getting entangled in legalese and complex details. Still, the non-lawyer and those not versed in legal terminology may stumble over unfamiliar terms such as “articles work,” “leasehold enfranchisement” and “the practice of conveyancing.” A brief visit to a dictionary may be needed. The author is also at a slight disadvantage because of ethics rules that limit the information he can divulge.

Altman’s writing style is straightforward and engaging, and he displays a wry humor. In a chapter devoted to his travels, for example, Altman notes that at a Boston hotel, he and his wife were told that the facility’s fire alarm system wasn’t working properly and to ignore it if it went off. “We were not about to trust our lives to the vagaries of their electronics and possibly be burned alive, so we had to find another hotel.”

While the book holds limited appeal for general readers, those interested in property law, particularly students, will find the author’s accomplishments and experiences noteworthy and informative.