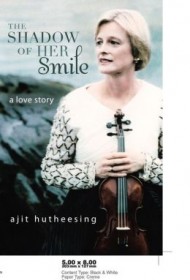 At the beginning of The Shadow of Her Smile, we learn that its subject, violinist Helen Armstrong, died while performing in concert. While it can be hard to approach a work of nonfiction knowing it will be an emotional journey, this touching tribute to Armstrong’s life, from husband Ajit Hutheesing, displays his love and care on every page.

Hutheesing sketches portraits of Armstrong and himself prior to their meeting; he’s a member of India’s famous Nehru family and was a school chum of Zubin Mehta; she was groomed from age three to be a violin prodigy, but curtailed her orchestral dreams to care for her dying first husband. The primary focus, however, is on their love and marriage. After being set up by a friend at a dinner party, the two fell hard for one another, working to maintain a long-distance relationship in separate Connecticut towns.

They grew closer as Hutheesing, who worked in finance, helped Armstrong build a program that brought classical music into area homes and schools, and they married after seven years, deciding “(M)arriage would be a medal we would reward ourselves for having had a wonderful relationship.”

The book opens with Armstrong offering introductory remarks on stage at a concert. While playing with the group, she suddenly collapses. EMTs could not revive her.

The story is heartbreaking —made all the more so by the inclusion of remembrances of Armstrong’s peers in the music world. She was passionate about her art and worked tirelessly to infuse others with the same enthusiasm. This book will secure her legacy, and it’s a worthy effort. Hutheesing’s writing is polished and compelling.

The Shadow of Her Smile is a fond remembrance and tribute that may also offer comfort to someone processing the loss of a loved one.