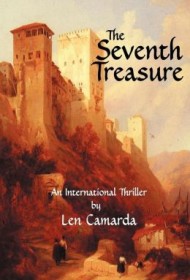 When his sister is killed in a mysterious car accident in Granada, Spain, U.S. Secret Service agent Gene Cerone travels into the heart of the former Islamic kingdom and is soon confronted with a confounding mystery surround his sister’s death. In his debut novel, Len Camarda unfolds a measured, history-rich conspiracy thriller that reads like a European-based version of gritty cop flicks from the 1970s.

Gene’s sister, Gina, was a professional photographer working in Spain when she was suddenly killed. When he comes to retrieve her body, Gene becomes intransigently linked to Lieutenant Mercedes García Ríco of the Spanish national police force. A little digging uncovers the fact that there are half-a-dozen deaths linked to Gina, who had been traveling throughout Granada collecting stories. Gene abruptly resigns his job and returns to Spain to learn the truth behind her death.

“Your sister rolled a little pebble off the mountain, and it started to gain speed and shake loose other pebbles, then bigger stones, and soon boulders,” sneers one of the bad guys during a confrontation with Gene. “Before long, it became critical for us to contain the landslide, and unfortunately, there were casualties.”

Camarda does a nice job of spreading a mix of breadcrumbs and false leads, keeping readers in suspense. The plot eventually revolves around an unfathomable conspiracy, as well as a search by various parties for seven treasures, whose locations were long ago masked, using phrases from a collection of fables we now know as The Arabian Nights.

The novel features some flat characterizations (not least our hero), and some might see echoes of Dan Brown in its fictionalization of history based on a few truths. But the novel is awash with the rich culture and vibrancy of the Iberian Peninsula. Camarda has obviously done his research, and his travels in the region lend credence to the book’s fertile setting and story. Readers who appreciate a complex plot and engaging historical fantasy will find much room to roam in The Seventh Treasure.