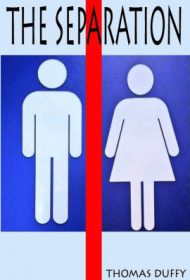 Thomas Duffy’s science fiction novel is based on an exceptionally imaginative premise, taking readers into the 22nd century when the sexes are separated.

Duffy set his story in an overpopulated and undereducated world where “crime and pregnancy ran rampant, so laws were enforced that managed to . . . conceal the fact that there are two different sexes.” Males and females are separated until the age of 22, when they are first permitted to learn of the existence of the other sex.

Duffy presents a striking vision of a dystopic, Big-Brother-controlled society reminiscent of Orwell’s 1984, and Huxley’s Brave New World. Daily doses of sexual repression medicine are the norm until the moment it’s revealed that another sex exists. Licenses to procreate are required, and the children are whisked off by the state until they are allowed to meet their parents.

In this bizarre world, Finn, a mathematical prodigy, “asks all the hard questions” and in so doing, runs afoul of the system that has granted him an esteemed teaching position and financial success. As Finn slides down his self-made slippery slope into the hell world of knowledge about the true nature of the society, social commentary about religion, gender, class, success, fulfillment, and the meaning of life fill the pages.

This is a near-genius conceit, and the ideas and social commentary presented along the way are intriguing. Unfortunately, the storytelling struggles to rise to the level of the author’s vision. Duffy overuses the narrator’s voice, which pulls readers away from the characters’ visceral reactions. Meanwhile, the prose and dialogue are pedestrian (“Why are you here?” “It’s a long story.” “We have all day.”); the world-building is incomplete; characters other than Finn are one-dimensional; and the book’s grammar needs editing (e.g., “In a quite sneakily [sic] fashion.”)

Some readers will enjoy the story for its interesting, twisty plot. But thoughtful revision to correct the abovementioned flaws would greatly improve the novel’s appeal overall.

Also available as an e-book