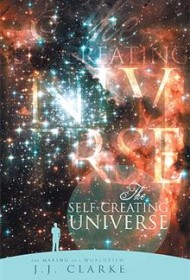 The Self-Creating Universe is author J.J. Clarke’s comprehensive effort to define and defend the burgeoning philosophy of emergentism, which might be described as the view that the universe, at every level, displays a tendency toward creativity and transformation (supplanting a previous view of the universe as something impersonal and mechanistic). Emergentism, therefore, may provide an answer to the nihilism that has seemed inevitable since Darwin and Nietzsche, and begin the reconciliation between science and spirituality. Indeed, in the author’s view, there is almost no area of philosophy left unaffected.

The breadth of Clarke’s scholarship is impressive, synthesizing a staggering array of ideas from Western philosophy. He also draws readily from Eastern mysticism, world literature, and recent developments in physics, biology, and psychology. Clarke’s style is closer to the continental tradition of philosophy than the analytical tradition (he is more concerned with relationships of ideas than deduction from fundamental principles) and his work is more engaging and literary as a result. It is a stimulating read, equally erudite and accessible.

The Self-Creating Universe is not, however, persuasive in every instance, and some of the author’s references are questionable. For example, he quotes from The Tao of Physics, but neglects to note the extensive criticism the book received for inaccurate science, and in one instance he assigns near death experiences more credibility than many think they deserve. In philosophical terms, the way he links emergentism to the free will debate is provocative and organic, but his attempt at reconciling ethical theory is more polarizing (emergentism is a good fit for the virtue ethicist, but he is less likely to sway others).

Nonetheless, The Self-Created Universe shines on two distinct levels: It is a worthy contribution to the history of philosophy (and particularly the philosophy of science) and, in its best moments, it compels readers to recognize an optimism and spirituality of the world we occupy now, rather than a world just beyond our grasp.