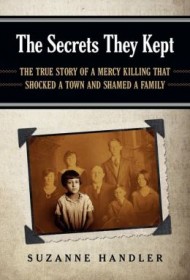 In this true story, author Suzanne Handler struggles to make sense of her family history after a life-changing family secret comes to light.

The secret is a doozy: her beloved maternal grandfather murdered his then-16-year-old daughter Sally – Handler’s aunt – in a murder-suicide pact in 1937. Despite the pact, he only managed to wound himself and ended up on trial, receiving probation for the “mercy killing.” Handler is forced to reconcile what happened with what she knew of her gentle Jewish grandfather. She embarks on a journey to learn how the murder affected her family, particularly her mother, with whom she had always had a strained relationship.

Handler, a mental health educator and journalist, does her homework, travelling to the scene of the crime in Cheyenne, Wyoming, and visiting the long-neglected grave of her Aunt Sally. She only discovers another layer of mysteries. Although she learns that her aunt had been diagnosed as schizophrenic shortly before the pact — a source of shame back then — Handler can only speculate on her aunt’s state of mind. Handler’s uncle refuses to talk; her mother is only slightly more forthcoming.

Without much emotional evidence to work with, Handler fills the pages with court documents and such ancillary topics as how Jews such as her grandfather were funneled through Galveston, Texas, instead of Ellis Island upon immigration and the state of mental health in ‘30s. Interesting stuff to be sure, but none of it provides much insight. Writes Handler, “I had hoped to find acceptance of our hidden past. Instead my journey has led me back…with more questions than answers, more heartbreak than peace of mind.”

Her inconclusive search is as frustrating for the reader as it is for Handler. Still, her journey serves a useful purpose, pointing out how destructive it is to hold onto family secrets. Armed with new understanding, Handler is able to give this long-forgotten family member a proper burial. The book is dedicated: “In Memory of Sally, Rest in Peace.”