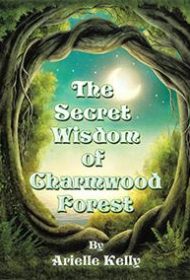 In Arielle Kelly’s first book for children, a group of animal friends learn lessons about responsibility, courage, and honesty when they must rescue one of their own.

Wise owl Oscar, keeper of the Old Wisdom in Charmwood Forest, serves as teacher to a group of young students, including a goat, lamb, wolf and deer. When Oscar decides to attempt a dangerous journey to gather a rare herb, he invites the lamb, Larry, along. Eager to reach his goal, Oscar ignores a warning from a mysterious sea horse, who is a messenger from the Unseen World. This judgment error puts Larry in grave danger, and the lamb is viciously attacked. Larry’s fate depends on his fellow students, whose actions teach their mentor an important lesson on honesty and humility.

Kelly has created an imaginative world, and she showcases her poetry background through several characters who speak in verse, including the mythical “Beings.” However, the book suffers numerous distracting flaws. The format is confusing, as the large trim size seems designed for young audiences; however, the lofty language (“Maybe it was Creation’s Muse that spoke through him. The One who, down the long ages, has uplifted and inspired the creation of art in all of its forms…”) and some content, including mildly gruesome depictions of death or violence, seems too mature for those readers.

The central plot is also problematic. The supposedly wise teacher, Oscar, leads Larry into danger and frames the innocent wolf when Larry is attacked. This makes the students’ unwavering loyalty and devotion to their flawed, self-centered teacher disconcerting.

Finally, although lovely nature photography is used throughout, the pictures are often not well-synched with the references to them in the text. For example, Kelvin the goat is introduced on page 3, but readers must turn to page 4 before finding his (uncaptioned) picture.

Overall, The Secret Wisdom of Charmwood Forest has some admirable elements, but it requires revision to reach its full potential.