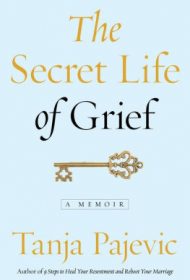 After Tanja Pajevic’s father died in 1993, she spent a decade wrapped in heartbreak and regret over their fraught relationship. So when her mother passed away in 2012, she was determined to get grief right this time. Her struggle is detailed in her engaging memoir, The Secret Life of Grief.

The married mother of two sons, Pajevic sought ways to grieve openly, despite cultural pressure to hide the loss and “move on.” She vividly describes her fury at everyone around her—why didn’t people ask her how she was feeling?—through her years of self-examination, therapy and the search for the just-right symbol of her mourning (she finally settles on a tattoo spelling out LOVE).

It’s a slip-slide process—one step forward, two back—but Pajevic, a creative writing professor, tells her story so intimately that readers can’t resist rooting for her. She comforts herself with meditation, dancing and occasionally taking to bed, letting readers see her entire messy life: Sometimes she fails to do what she knows would lessen the pain, feels overwhelmed raising two boys and neglects her marriage.  Among many epiphanies, Pajevic realizes she might be hard-wired for negativity and works to change that mind-set. Perhaps the most important lesson she learns is one of self-acceptance.

The book includes her immigrant parents’ history and her time as a graduate student in Yugoslavia, their birthplace. She’s a voracious reader, generous in naming books and teachers who enabled her to “unpack her anger” and rethink her attitudes. Pajevic’s journey brings her to the edges of New Ageism, which may not be everyone’s cup of tea (e.g., she experienced being in her mother’s womb while in the warm bath used in Watsu, a passive form of body work.) But readers open to such ideas will likely find her journey edifying.

Pajevic accomplished her goal: to examine grief through her own experiences. Her well-wrought book could comfort others going through sadness and loss after a death.