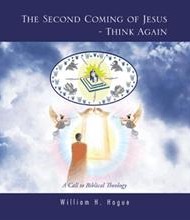 In 1970, Hal Lindsey and Carole C. Carlson’s The Late Great Planet Earth brought to the forefront of American consciousness the dispensationalist idea that the Second Coming of Christ–and the destruction of the world as we know it–was imminent. While scaring the pants off quite a number of people, many others embraced this Doomsday scenario enthusiastically, and it can be argued that the aftermath left by this national bestseller lead to a rise in fundamentalism in this country.

William H. Hogue’s The Second Coming of Jesus–Think Again addresses the cultural eschatological worldview that was forged by that book. Hogue argues the Second Coming is very real indeed. But unlike Lindsey and Carlson, he posits that it’s not going to happen tomorrow or next year. The reason, Hogue explains, is because it already happened in 72 AD, within a generation of Jesus’ death.

Hogue comes up with this date through Biblical and historical detective work that provides insight into 1st century Roman history, the Prophets, the Gospels, the book of Revelation and the infamous number 666. For Hogue, Revelation is more history than prophecy, less about the destruction of the world and more about the fall of anti-Christians in Palestine before the second century.

While the book could be better served with a healthy dose of editing, Hogue’s writing is mostly fluid and he seems to have done his research. His references and citations, while necessary, can make for dense reading, however, especially for those who aren’t as well-versed in scripture as Hogue. Still, the book is an interesting take on the Second Coming and the struggles many have endured over the last two millennia to understand such a veiled notion. Bible students and church groups may find much to discuss here.