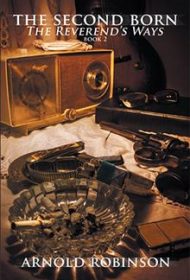 Author Arnold Robinson has lived in the White Mountains of Arizona for three decades, but his childhood roots are in the harsh Appalachian region of southern Ohio. This is where he sets this eloquent and highly atmospheric tale about life in a bone-crushing sawmill and the toxic relationship of a cruel, bigoted father and his two embattled sons, who seem always on the edge of violent retribution or madness.

The villain, known as “Jimbo” or “the old man,” is at once a preacher, a philanderer and a drunkard, given to fits of blind rage directed at his long-suffering wife (who’s the picture of blackberry cobbler-baking, Bible-quoting saintliness) and his boys James and Arnold Ray (our narrator), who slave endlessly at the mill only to be abused by their sneery, gun-toting father. Not surprisingly, everyone has blood in his eye—including the deputy scoundrel Bill McCoy, who torments the brothers’ beloved pack mules and has all the empathy of a tree stump.

Robinson shows off a keen ear for his “baccer-smokin’” antagonists’ backwoods dialect (“I see that old man of yern hain’t kilt ye”), a classic grasp of Oedipal melodrama and, best of all, the gift for providing a nearly perfect moral centerpiece: His earthy, pipe-smoking lumberjack Calvin Williams, who hires on as a workmate at the mill, combines the woodsy skills of a Paul Bunyan with the rough wisdom of a country poet. “[B]ig and crazy as he acted…he had a kind heart about him,” Arnold observes.

The author, who is writing a series of these Second Born volumes, has a faint weakness for sentimentality (the boys’ mother is fairy tale-virtuous), and his otherwise admirable rustic lexicon might deploy a few too many “milkin’ sheds” and “Whiskey Hollers.” But Robinson is a sure-handed creator of vivid, authentic regional fiction who has attained the highest compliment any reader can bestow: It’s just like being there.