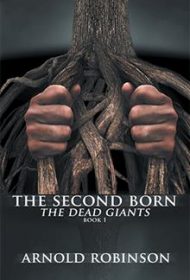 In the late 1950s and early 1960s, Arnold Ray and his older brother, James, endure the hardships of living in poverty with a loving, saint-like mother and a father who teeters between sobriety as a self-proclaimed preacher and a ne’er-do-well drunkard.

The family’s dread of their father “backsliding” is profound and palpable. The ability to keep their home, have food on the table and maintain a semblance of a happy family life all depend on the elder Richardson’s ability to stay sober. Arnold Ray’s disgust for his father’s bad habits mounts as the fear of losing the family farm looks increasingly possible.

Along with strong character development, the author’s descriptions of the land and the boys’ tribulations and occasional joys are engaging. It’s easy to visualize the family farm, dusty roads and hardscrabble lifestyle.  “At the edge of one particular field,” Robinson writes, “there was a patch of strawberries. There were so many that you could see them from a pretty good distance, small berries, some no bigger than a fingernail but sweeter than sugar.”

It’s more difficult to believe young Arnold Ray’s bawdy vocabulary. He’s portrayed as a good kid who loves his mother and has a strong work ethic. The frequent cussing seems out of sync with his nature. Additionally, the use of country dialect is inconsistent. “Baccer” and “winder” (for “tobacco” and “window”) are used frequently, but other evidence of dialect is curiously scant.

These are minor distractions overall. Although Robinson’s book is labeled a work of fiction, the similarities of his name and author bio to his main character suggest otherwise. Perhaps that’s why his narrative about making the best from next to nothing is so vivid. With its unresolved conclusion, the novel will prompt many to pick up the sequel.