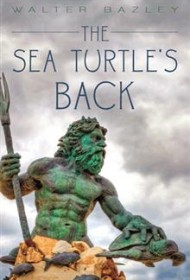 Born in England, Walter Bazley served in the Royal Navy during World War II, retiring in 1946 as a lieutenant in the branch’s Volunteer Reserve. Although seafaring would never again dominate Bazley’s life–he served the United Kingdom in Uganda, managed property in West Australia, and ended up in Ottawa as a public servant–time on ships seems to have often dominated his thoughts.

The Sea Turtle’s Back is an admittedly autobiographical novel, complete with photographs from Bazley’s life. Bazley mingled his own experiences with those of brother officers, friends and relatives, changing the names of people and ships, to piece together a plot told largely through the mind of the fictional Paul Henriques, captain of the steamship Marquess. The ship is in distress, all power lost, on the ocean between the departure point of Cape Town and the intended destination of Montreal.

The crew and passengers have been evacuated by helicopter. Henriques, however, refuses to abandon ship, determined to remain on board whether it is rescued or sinks. Now Henriques relies on a battery-dependent radiotelephone that he uses to summon help. He is unsure whether the rescue boats will reach the Marquess before it sinks.

Bazley employs that dramatic situation to compose a novel of flashbacks as Henriques reflects on his life, including his wife and children still residing at home. To reveal the outcome would constitute a spoiler review.

The book is filled with nautical terms, which Bazley usually explains well. The flashbacks proceed somewhat, but not entirely, chronologically, which helps the narrative flow. On the down side, the shipboard drama on the Marquess is mostly ignored for nearly 200 pages in deference to the protagonist’s past, a tactic that dampens any tension formerly driving the novel full speed ahead. Still, Bazley writes well, and the novel succeeds on two levels–as a post-WWII period piece, and as a saga of life at sea during a sailor’s youth.