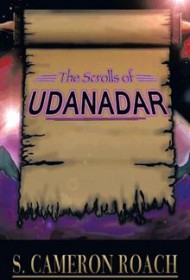 S. Cameron Roach’s solidly written young adult fantasy works, in large part, because of its multi-tapestried story line, which is simultaneously an adventure fantasy, a coming-of-age tale and an unlikely romance. It works, but unfortunately without rising above the mean.

The Scrolls of Udanadar revolves around Bartholomew Fix, a 15-year-old kid whose soul is calling out for adventure. After getting bitten by a bug of “extraordinary purpose,” he embarks on a fantastical journey that transports him to another world, a realm where Ka’uun – the energy that binds all things together – can be manipulated like magic by those with the talent to do it.

Fix becomes the apprentice of Almandar, Grand Wizard of the Realm and Protector of the Sacred Scrolls of Udanadar. The wizard gives Fix a more inconspicuous name, Arathorgas, and sends him on a quest to save the realm. The king is rumored to be dying and to avert catastrophe, Arathorgas and his partner – an aloof young woman named Yuari – must retrieve the sacred scrolls and a device of unknown origin. Arathorgas is attracted to the comely Yuari, but she despises his strangeness. Eventually, the young hero’s courage and wit begin to melt her icy demeanor, and together they experience life-changing revelations. The repartee between the misfit duo is engaging throughout.

The mission to save the realm is filled with action and adventure – pirates, wraiths, exotic locales – but Arathorgas realizes that there is a personal consequence: “This was my quest all along, to find the strength inside of me and discover who I am capable of being.”

While there are no major flaws in The Scrolls of Udanadar, there is nothing exceptional, either, as it offers just satisfactory characters and an adequate story. It’s generally entertaining, but ultimately forgettable.