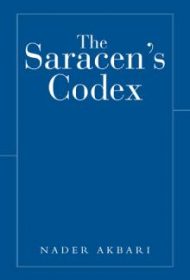 In The Saracen’s Codex, Nader Akbari offers a blistering indictment against Islam as a religion of peace.

Looking at the beliefs of Muslims as well as the history of the religion from its founding days to the present, the author argues that “Islam today is one of the biggest challenges facing Europe.” While terrorism is a threat, Nader Akbari acknowledges, the bigger threat, he believes, comes from European countries having adopted policies of “nonintegration of the Muslim immigrants and nonimmigrant communities.” This, he contends, allows Muslim communities to work and live outside the law of sovereign nations, jeopardizing free speech and the rights of women, gays, and believers of other religions.

Covering such topics as Muslim emigration from the Middle East to European nations and the rise of Islamic fundamentalism, Akbari explores how Islam transformed such nations as Iran “from the possessor of one of the oldest cultures, a vast empire, and the cradle of civilization, to home to International Islamic Terrorism in the twentieth century.” He also takes Islam to task for its abuse of The Universal Declaration of Human Rights, citing verses from Islamic scripture that counter such ideas as equality and freedom of expression.

While the prose includes grammatical mistakes and some repetition, it’s generally easy to read and understand. Akbari is a passionate writer with a clear and deliberate style. Many liberally minded, politically correct readers will find his arguments controversial, but he backs them up with research and quotes from the Quran that are often startling: Case in point, Islam’s belief in the use of torture against enemies: “ ‘Indeed, the penalty for those who wage war against Allah and His Messenger…is none but that they be killed or crucified or that their hands and feet be cut off from opposite sides or that they be exiled from the land…. (Quran 5:33)’”

This is a challenging topic. For those open to the subject, Akbari offers a thought-provoking, if controversial, read.