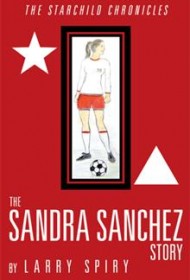 In Larry Spiry’s futuristc novel, Sandra Sanchez is a star soccer player for her college in the year 2032. She develops a devastating illness that sidelines her, making her team struggle to find a way to win without her.

As she worsens and the doctors can find no discernable cause for her strange symptoms, her coach, Roxanne “Roxy” Gilchrist, learns of another athlete who suffered from a similar illness. This boy had been found abandoned in New Mexico as an infant, just as Sandra had been, and he also had a triangular-shaped birthmark on his right shoulder. Roxy, Sandra’s doctors, and Sandra’s adoptive parents all hope that by learning more about this boy and what had happened to him, they may be able to save Sandra. The more they uncover, the more mysterious Sandra’s origins become, and her friends, family, and doctors are forced to keep extremely open minds as the possibility that Sandra is not only of alien parentage but actively transforming becomes apparent.

Although the title would indicate that Sandra is the protagonist, she is merely a catalyst for a series of events and problems, and never really developed as a three-dimensional character. Her coach, Roxie, is far more present, and her team’s games, and her fellow player’s illnesses, injuries, and scoring take up much of the book, with far less emphasis on investigating aliens, Sandra’s experience of her illness, and her unusual possible parentage. It’s unclear what the author’s choice of setting the book in 2032 adds to the story.

The author obviously knows soccer and the anxieties of a Division 1 coach, and these elements are written with clarity. But Sandra’s story as a beloved team member struck down by a terrible illness and discovering her alien potential is never fully realized.