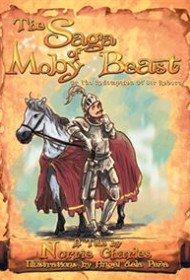 Styled after epic poetry, The Saga of Moby Beast transports readers to a medieval town where a frightening creature emerges from a swamp and kidnaps a local damsel.

A huge monster emerges from a marsh one day, terrorizing a nearby town. When the miller’s daughter is kidnapped, the townspeople recruit Sir Robert, a grizzled knight who lives nearby, to save her. Although Sir Robert’s cowardice is quickly revealed, he rallies enough courage to kill the beast and return the young woman to her home, earning himself the respect a knight deserves.

A classic tale of heroism, The Saga of Moby Beast shows that even seemingly valiant men can be afraid, and that facing your fear is more admirable than never being fearful in the first place. Young readers will be charmed by the frightened knight and other subversions of character tropes.

That said, the book’s appeal is diluted by several factors. The poetic form, loosely a Spanish Sestet, provides an upbeat and fun rhythm to the saga, but the metering is inconsistent from stanza to stanza, preventing readers from fully losing themselves in the story. Misplaced punctuation further distracts, as in this stanza with unnecessary commas: “So, without hesitation,/A small delegation,/Was chosen to speak with the knight,/to ask if he would,/(As a brave knight should),/Take up their earnest fight.”

The book is quite long and includes full pages of text without pictures, which can be daunting for a young audience, and the vocabulary includes many unfamiliar words (“grodious,” “gorse” “pong”).  Although the author includes word definitions at the end of the book, stopping to read the definitions impedes enjoyment of the tale, and some of the unfamiliar words aren’t included.

Overall, Saga of Moby Beast is an enjoyable read—an adventure with heart and humor. Its appeal would be greater, however, with a shortened tale, less challenging diction and more consistent metering.