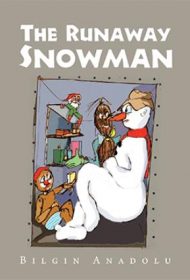 In Bilgin Anadolu’s children’s chapter book, a snowman comes to life and heads for the North Pole, joined by other misfits along the way.

One winter night somewhere in Europe, a snowman escapes his yard. He decides that to be safe and free he must get to the North Pole, “where the snow falls all year.” After he sets off, he meets a scarecrow, a gnome and a puppet, all with their own hoped-for destinations: The scarecrow dreams of forever-warm California; the gnome yearns for his ancestors’ land, and the puppet wants to return to the workshop where he was built. They eventually stow away on a ship bound for Oslo before the book concludes with room for a sequel.

The Runaway Snowman uses the familiar, often charming plot of the journey, but the characters’ motivations aren’t clear and some elements are puzzling. For example, the snowman assures the scarecrow they can reach California, but he isn’t even sure where that is.

The primary flaw, however, is meandering execution. Descriptions and reflections take up whole pages, and characters rehash introductions and goals whenever they meet someone. Challenging word choices and old-fashioned phrasing, possibly resulting from poor translation, make the story difficult to navigate; for example: “A throwaway knows where they are heading, and it’s not nice. There is no sunshine or enchantments at a tip. Then In a sudden burst of oomph, he [the puppet] said grinningly…”

The book includes color images and line drawings on most pages that complement the writing style, but they aren’t always integrated appropriately with the text. A reference to the group being in Poland, for instance, comes three pages after a map of Europe appears with no countries named.

In sum, while this is an imaginative tale, it would greatly benefit from better developed characters, streamlined storytelling, and more polish in the presentation.