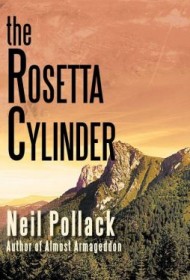 An ancient alien artifact is at the core of this compelling science fiction thriller that pits dedicated academics against ruthless criminals and competing world governments in a race to possess an item so unique and valuable that it could dramatically alter the future of mankind.

On his deathbed, archaeologist Don Carter asks that his estranged son Steven read a manuscript detailing Don’s perilous quest to secure a rare find he discovered in Peru. It was in 1985 that Don, separated from his wife Diane, traveled to Lima to work for the university there. During an excursion, Don and his assistant, Diego, discover a golden cylinder made of a strong though indeterminate metal that transmits signals and emits radiation when struck. Until they know what they’re dealing with, Don insists on keeping the object hidden.

Diego believes the cylinder could be his ticket out of poverty and Peru. He betrays Don, and sets in motion a series of events that result in the kidnapping of Don and the deaths of others. Back in the states, Diane and Don’s mentor, an aging academic, make plans to head to Peru to rescue Don, who is determined to preserve the cylinder at any cost for the knowledge it contains, while others want only the power its ownership bestows.

The strength of this book is the author’s ability to make it all sound plausible. While written well enough, the prose isn’t polished to a high gleam. Rather, it is clean and respectable. What would have made this good book even better is a greater sense of place and richer descriptions of each environment. Nonetheless, the intriguing premise and the surprising conclusion carry the day, making this an enjoyable read for science fiction aficionados.