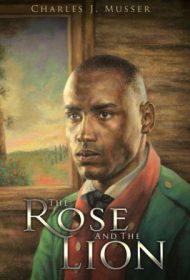 The Rose and the Lion is a novel based on the true story of Richard Pierpoint, an enslaved African who fought for the British against the Continental Army led by George Washington, in exchange for his freedom from slavery.

The story opens with Pierpoint befriending a female slave, Shenandoah. Together they run away to join Colonel Butler’s Rangers, a troop committed to guerrilla style warfare against the Continental Army. On their travels, they band with other runaways to form an unusual but respected unit within the Rangers.

Shenandoah is an agile and brave warrior, whose fierce independence and beauty enthralls Pierpoint. Freedom is their goal, but dangers lie between them and possible safety in Canada. They must face Pierpoint’s old master, perilous battles, and a challenge from within their own ranks before they get their chance to live freely.

Musser offers a range of interesting characters with some humorous moments that lighten the narrative. Even so, the story doesn’t flinch from the cruelties of slavery and war. America in the 1770’s is well evoked, and from taverns and marketplaces to forests and battlefields, Musser’s descriptions are crisp and vivid.

However, while mostly fast-paced, at times the stride becomes uneven. For a short novel, the author employs many points of view, including a scene with George Washington that’s only tenuously connected to the main narrative about Pierpoint. At another point, the passage of two years is noted in a chapter heading, but the characters discuss the events of the previous chapter as if no time has passed. Toward the end of the novel, Musser jumps far ahead in Pierpoint’s life and recounts what has happened to Shenandoah from a distance, diminishing any emotional impact.

A longer story would allow for more character development and dramatic intensity. Still, The Rose and the Lion should appeal to readers interested in this little-known character from American history.