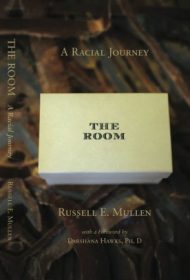 The Room: A Racial Journey is a memoir written by a white American man born in the 1950’s, describing his understanding of race relations in his country.

The book is split into three sections. In the first, author Russell E. Mullen recounts episodes from his Florida childhood, where he became aware of the issue of race. His mother’s family is racist, deriding his ambition as a small boy to become a garbage man, for example, because such jobs are for “niggers.” Happily, Mullen is given a positive view of African Americans by his father.

In Part II, Mullen leaves school and joins the US army. He’s deployed to a base in Germany and placed in a room where most of his fellow soldiers are black. Mullen is not racist, but here he sees that others are, while gaining insight into race issues through his strong friendships with the other men. It’s also here where he develops a serious drug problem, selling and taking heroin, and is dishonorably discharged from the army.

In the final section, Mullen reflects on life after the army and on American race relations over the last four decades.

Mullen admits that he and his friends didn’t discuss racism and that he didn’t seek their point of view, fearing he would be rebuffed. Instead, he closely observed his friends and, years later, presents his own interpretation of their differing approaches to racial interactions. Unfortunately, every event he recalls is re-examined through the lens of his personal stance on racism, leading to considerable repetition and pedantry. When he puts aside the race question to explain his drug problems, the narrative flows more freely.
The book is also marred by frequent tense changes and basic spelling errors, e.g. “heroine” instead of “heroin.”

Nonetheless, Mullen’s intentions are honorable and his message positive. Those who can overlook the book’s flaws should find moments of insight into the unspoken racism that continues to exist in the U.S.