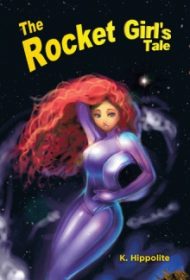 Fans of sci-fi and cyberpunk writers like Frank Herbert, William Gibson and Phillip K. Dick will find familiar cues in this story of Reiki, an engineer and aspiring rocket scientist drawn into an unlikely adventure in a futuristic, dystopian setting that slightly resembles Earth. But The Rocket Girl’s Tale is greater than the sum of its influences: K. Hippolite offers a distinct voice and unique narrative vision in this thoroughly entertaining, refreshing tale.

The action kicks off quickly, after Reiki’s application to participate in the prestigious Moon Launch Program is rejected and she rebuffs the marriage proposal of a man she doesn’t love. When Reiki runs into Arthur, an aristocrat with familial ties to big industry, she’s drawn into an epic conflict that puts her in the cross hairs of high-ranking government officials and requires her to use her ability to hide complex information in her brain and eventually recover it. She also employs her power to freeze objects with her mind. Meanwhile, Reiki must also come to grips with her feelings for Arthur, a match that carries its own mortal dangers.

Hippolite balances all these elements well, dividing the narrative between dynamic action and engaging character development. Through a well-crafted and spirited narrative style, the author offers a cast of characters full of dimension and depth. Reiki, in particular, is carefully and thoughtfully drawn. The dialogue is clever, the descriptions vivid and the intrigue engrossing.

The only shortfall is an occasional lack of context. Reiki’s world is vaguely familiar, a version of our own world but marked by the wonders and pitfalls that come with further technological advancement. However, Hippolite never offers any detailed history or background; readers must put the puzzle pieces together themselves regarding the backdrop for Reiki’s adventures.

Fortunately, that’s a simple enough task, with the aid of Hippolite’s engaging writing style. Reiki is a heroine with intelligence, heart and verve who is sure to keep readers enthusiastically turning pages.