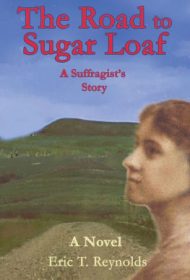 Eric T. Reynolds’ The Road to Sugar Loaf: A Suffragist’s Story proves a timely historical novel that focuses on the 19th Amendment and women’s fight for the right to vote.

From the panoramic views of Kansas to the protest gatherings in Washington D.C., the story unfolds around a group of individuals ensconced in the Suffrage Movement and their dealings with its detractors. Kathryn Wolfe and Mary Dodd co-own a bookshop in Sycamore Falls. Whether offering the latest works on women’s suffrage, joining in a local Women’s Club, or planning to attend related events in the country’s capitol, these steadfast women are determined to have a voice.

While the women gain support from local friends and colleagues, they also suffer the wrath of those who oppose the Suffrage Movement. Members of the local men’s Prairie Room Club, for example, believe that women gaining the right to vote would disrupt male and female societal roles. Reynolds sharply details derogatory incidents the suffragists suffer, from car wheel splashes, thrown tomatoes, and angry mob attacks, to imprisonment (for blocking traffic while picketing) under vile conditions.

Yet small triumphs for the cause portend larger success: “When there’s a common goal and enough people work toward it, it can be realized. Like votes for women.”

Reynolds creates an emotionally charged atmosphere laced with additional themes of infidelity and domestic abuse. Close friendships among the central characters prove a major highlight. The story plays out chronologically, from 1911-1920 with a few segues to the past. Revelations of the 1918 flu pandemic will prove particularly relevant to today’s readers. The beautiful Sugar Loaf hill, which the physically challenged Kathryn looks to conquer, serves as a symbolic meter for the struggles of the suffragist cause.

Although some transitions from exploring the area’s natural beauty to conversations about women’s rights seem abrupt, and the text could use some minor proofreading, Reynolds’ work is an entertaining and knowledgeable look at a motivating time in American history.