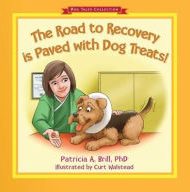 Patricia Brill continues her Dog Tales Collection with a compelling tale about healing an injured pet in her children’s picture book, The Road to Recovery is Paved with Dog Treats!

Turbo, the dog featured in Brill’s other Dog Tales picture books Do Bad Dogs Get Cancer? and Don’t Say Good Bye Just Say See You!, is a veteran of several surgeries. As the story begins, he’s awaiting another surgery at the vet’s office. There, he meets Murphy, a dog who has swallowed several dangerous items and is terrified of the prospect of his own surgery the next day. With the help of a cat who’s recovering from an operation, Turbo explains the entire process to Murphy, assuaging his fears. Soon, Murphy’s surgery is successful, and he returns home safely.

As with Brill’s previously mentioned Dog Tales books, the story’s likable animal characters share information among themselves, discussing everything from X-rays and anesthesia to catnip and why animals have to wear cones after surgery. The technique allows young readers who may be facing surgery for themselves or their pets to shift the focus to these fictional animals while simultaneously increasing their understanding of what they, or their pets, will experience.

Several of Curt Walstead’s illustrations are used more than once in the book, and the repetition can be a bit distracting. But the illustrations succeed remarkably in their primary goal of telling the story, with some nice touches such as a blurred foreground figure of Turbo as he faces the main subject of the picture, Murphy.

Although it’s about animals, The Road to Recovery is Paved with Dog Treats! could — and should—find a place in the reading rooms of children’s hospitals as well as veterinary waiting rooms, where it is sure to provide comfort to those facing stressful situations.