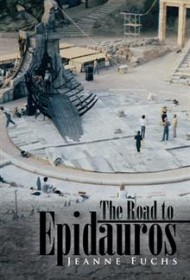 Jeanne Fuchs’ atmospheric diary chronicles a 1990 trip to Greece to see her friend Andreas Voutsinas’ production of Medea at the legendary open-air theater in Epidauros.

The two had met decades earlier in the States, where Voutsinas was a member of the Actors Studio and had a moderately successful career as an actor (most notably in The Producers and several other Mel Brooks films) and acting coach (most notably of Jane Fonda). He returned to Europe in the late 1960s, and by the time Fuchs came to visit he was a celebrated teacher and director, his production of Medea a highly anticipated cultural event.

But before opening night, there was plenty of eating, drinking, dancing, and gossiping in the city of Thessalonike, where rehearsals took place. Fuchs happily fell into the theatrical lifestyle of sleeping late and staying out until dawn, and she obviously had a marvelous time with the uninhibited Greek cast and crew. “They are spontaneous and completely unashamed,” she writes. “…They exude a unique brand of joy.”

Using only first names for all except Voutsinas, the author is frank but empathetic in recording the squabbles and personal dramas common among artists at work and at play. Her scattered, very brief accounts of rehearsals and performances are perceptive enough so that readers will wish that Fuchs had devoted more of her attention to Medea and less to descriptions of meals and trips to the beach, though both sound delicious. If this book were twice as long, it could have accumulated enough narrative weight to offer real insights into the creative process. Instead, it’s like a tantalizing postcard from a friend on vacation: pretty, but you wish it told you more.

Blue Ink Heads-Up: Foodies will love the many savory descriptions of meals; travel mavens will appreciate the occasional glimpses of the Greek landscape.