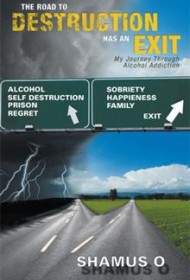 This memoir tells the jarring true story of one man’s journey from an early life of privilege through more than 40 years of self-destruction due to his alcohol addiction.

The book begins during the author’s youth in Rhode Island, when he witnessed the ritual of his parents and other family members gathering to drink every Sunday. Early on, he associated booze with “fun, laughter, success and happiness.” He snuck his first drink at age 13 and immediately decided he liked the light-headed, tilt-a-whirl effect.

From then on, the author drank hard alcohol at every opportunity. School and work failures built up drastically throughout the years as he lied, cheated and shirked his duties so he could sneak off to get drunk. His destructive lifestyle also deeply impacted his wife and three children and embarrassed family members.

Eventually, a pileup of DUIs landed the author in prison for a felony. Only then did he admit he was an alcoholic and seek to turn his life around with help from a higher power. Now 57, the author says he’s sharing his experiences to give others strength and to help those working in the fields of alcohol or drug abuse.

Aside from an unfortunate misspelling of the word “happiness” (“Happieness”) on the book’s cover, Shamus O writes clearly, descriptively and in a straightforward manner. Still, the book’s intended audience is unclear. The author devotes just a few pages to explaining how he kicked his alcohol addiction, so his story won’t be of much help to counselors or others looking for tips on how to cure the problem. General readers might find it a sobering look at the ravages of addiction, but so many other titles have taken that path (Jerry Stahl’s Permanent Midnight, for example); this rendition doesn’t add much that’s unique.

Even so, it’s a shocking story, and Shamus O is to be commended for his ability to write such a brutally honest depiction of his struggle.