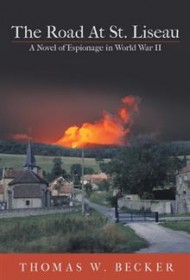 Thomas W. Becker’s novel follows a group of Resistance fighters and the Americans and British who aid them as they battle Nazi rule during World War II.

American soldier Robert Marsden carries out espionage work for the Office of Strategic Services. While flying a mission over France, Robert’s plane is shot down by the Germans, and he comes to in a safe house in the town of St. Liseau. There, he meets Lisa Jardin, whose family is active in the Resistance despite the constant threat from occupying Germans.

Robert and Lisa fall in love and marry after a whirlwind courtship. But soon the OSS drafts Robert for an espionage mission to prepare for the invasion of Normandy. While on his mission, the Germans capture Robert, and he barely survives the torture they inflict on him.

Upon his recovery, Robert, along with Lisa, goes to teach at England’s MI6 Training Center. This period of calm is short-lived, however, as the OSS next sends Robert on more perilous surveillance and sabotage missions that pair him with a French operative known only as “Mr. X.”

In outline, the plot seems to have all the elements of a gripping read. But The Road at St. Liseau never lives up to its inherently exciting subject matter. Robert’s missions have great potential but often feel rushed. And Becker devotes a disproportionately large amount of the novel to wooden, dialogue-heavy planning sessions and anticipatory scenes, rather than to the pure suspense of the missions.

To add to the problems, the novel’s characters feel like stock figures. This wouldn’t be a large liability if the action sequences were executed more skillfully, but because a great deal of the novel is dedicated to the characters’ conversations and emotions, it’s disappointing when they never really come alive.

The Road at St. Liseau, is based on an intriguing premise. Due to such flaws, however, it is unlikely to stand out in the crowded WWII espionage subgenre.