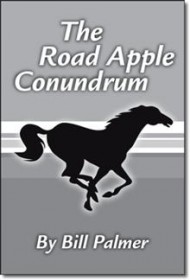 The Road Apple Conundrum is a roman ὰ cléf, beginning with the rugged life of author Bill Palmer’s adventurous ancestors at the turn of the 20th century and then traversing through Palmer’s own rakish life, from his disreputable formative years through his time as an international airline pilot. This fictionalized memoir ignites the author’s family history with saucy dialogue and action-filled drama.

The book opens with 15-year-old Hagen Palmer (the author’s father) spending nearly a year traversing the U.S. from the backwoods of Virginia to Boise, Idaho, to escape marriage to a girl thought to be impregnated by him. He works hard and earns respect in his newly adopted state. After almost being killed during a sheep drive by vicious men hired by cattlemen bent on destroying the sheep industry, Hagen eventually meets and marries the author’s mother, Zella, and William Palmer is born in 1932.

The balance of the book follows young William’s misadventures at school and around town, where he proves to be a troublemaker. When the Korean War breaks out, Palmer reports, he learns to fly airplanes, and eventually builds a career in commercial piloting. Here, the book morphs into tales of the author’s wild and crazy times, as he and his buddies regularly carouse, brawl and sow their oats among many willing women when not transporting passengers around the U.S., Europe, and the African continent.

Enhanced with black-and-white photos, Conundrum entertains with a lively writing style and well-developed dialogue, whose dialect conforms to the times. While clever, the language can be crude and offensive, sometimes peppered with off-color sexual banter, bawdy bar talk, racial slurs and politically incorrect references to people from other cultures. Palmer proves a scoundrel, rogue, adventurer and cad, and lays it all out there for readers to absorb.

Overall, the book’s content is both captivating and imaginative, with strong historical merit. It’s biggest blemish is the author’s insistent irreverence, which narrows the book’s potential audience.