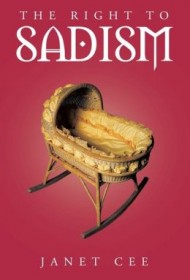 The Right to Sadism is an ambitious, addictive novel, touching on themes of friendship, cruelty, and revenge. It’s also strange and, at times, troubling to read.

Kate and Alison were best friends in school who fell out of touch. Years later, they reconnect and discover both have suffered from trauma. Kate was the victim of a gang rape, and Alison was forced to carry an unwanted pregnancy to term, then give up her baby for adoption against her will. They want to bring down one of the rapists as well as the head of an anti-abortion organization. Two of their well-heeled friends, Anne and Helen, help in their scheme to get revenge. As the women carry this out, unforeseen consequences arise, and the friends are forced to adapt.

This story is immediately gripping, not least of all because these women are middle-aged and upper middle class, not the sorts you’d expect to see building a torture chamber between tennis matches on their days off from work. The plot is intricate and a few scenes that depict when the women are almost caught are terrifically written, full of the tension of near-discovery.

There are hurdles, though. The book is overwritten; a construction project is visually diagrammed, for example, then each brick is described. And the friends don’t talk, they lecture: “I did not feel one ounce of guilt. I was glad. She deserved it…. Like you, Kate, I have come to the conclusion that revenge is the best therapy for healing an injustice.”

Furthermore, the story suffers from an inconsistent perspective: one character blames anti-abortion activists for her troubles, but from there argues repeatedly and at length that adoption is evil. Even in the high-strung context of the book, this argument works against the women, making them seem unsympathetic and cruel.

The Right to Sadism contains the raw material for a bestseller, but it needs editing for both length and tone to realize this potential.