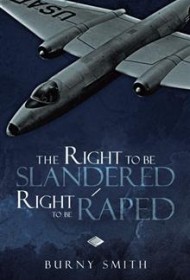 In her memoir The Right to be Slandered/ Right to be Raped, Author Burny Smith, now in her late 70s, shares her shocking story about being a Christian woman in the Air Force in the early 1950s. Needing GI Bill funds for her higher education dream, she endures harassment, repeated rapes, and verbal abuse, which she was expected to tolerate in order to fulfill her enlistment.

Admittedly, the title is off-putting and unlikely to attract interest in either a bookstore or online listing—especially in the Christian nonfiction genre. Nevertheless, Smith’s story unfolds, memory by memory, into an honest glimpse into the appalling chauvinistic “system” female inductees lived under in the ‘50s and the challenges of being a person of faith in the armed forces.

Even before Smith joined the Air Force, her upbringing in poverty and violent physical and sexual abuse by family members scarred her psyche and numbed her heart. Unlucky in love as well, she took every step of her life’s journey on rugged, uphill terrain. To overcome such odds—especially during the era prior to “women’s liberation”—is admirable and remarkable.

Missing here are tie-ins to cultural and historical references that would help ground readers in time and place. For example, no mention is made of the Korean War, even though the war was at its height during her enlistment. Also, because the book is structured as a series of vignettes or memories, readers are often introduced to places or people without sufficient background. For example, she writes “I loved going to the beach with Tom and his friends” before readers know who Tom is.

As a Christian testimony, Smith’s memoir includes language and topics that conservatives might find offensive and lacks what readers of this genre expect: an overt message of hope and redemption. Nonetheless, the story has merit as source material for military history buffs and students of 20th-century women’s issues.