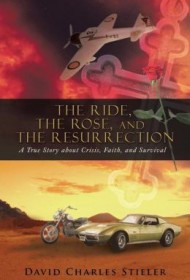 David Charles Stieler was your average middle-class guy – husband, father, veteran, musician, small-business owner – when his life was shattered on a Michigan highway. A hit-and-run accident nearly killed him and his wife, and sent them on a five-year journey of daunting medical, financial and personal challenges that nearly destroyed them. The Ride, the Rose, and the Resurrection is Stieler’s story of their remarkable recovery.

Stieler offers a brief look at his early years: he was a restless kid who married at 20, shipped out to Vietnam two weeks later, then came home, had three children and eventually started an automotive business in rural Michigan. On a Sunday in June 2007, he and his wife Carole went for a ride on their Harley, when a reckless driver hit them and left them for dead.

Carole suffered serious brain trauma, a broken scapula and clavicle, a shattered left elbow, hand injuries, two herniated discs in her back, broken ribs, a punctured lung and abrasions. He suffered two collapsed lungs and a mangled foot that nearly had to be amputated. They battled with insurance companies, underwent endless visits to lawyers and doctors, and felt the constant threat of losing everything they had worked for. Worst, perhaps, was their shattered marriage.

Stieler considered leaving his wife of 30-plus years and even suicide. But his faith in God, love for Carole and the support of friends helped him find a new life, if not total peace.

Stieler demonstrates excellent writing skills; he’s direct and clear, avoiding turning his story into a pity party. Nor is he strident and overemotional, which would have been tempting given the subject. Any reader will relate to the couple’s struggles — particularly those of a certain age who can more easily put themselves into this family’s shoes. In the end, people will come away with sympathy and respect for an average guy who surmounted the biggest challenge of his life.