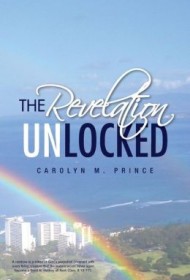 Few books of the Bible have been more closely examined than Revelation, the prophetic, ultimate chapter in Christian scripture. With its often baroque and sometimes violent imagery, its enigmatic symbols and ciphers, and a cosmic story that pits good against evil, it is a work that stirs the imagination (and let’s face it, it scares the heck out of people, too). In The Revelation Unlocked, Carolyn M. Prince, a church and civic leader, sets out to reveal the secrets of this mysterious text and in the process unpack what is often a dense and confusing work.

Prince covers a wide-range of topics—from the Rapture to the Tribulation to the Anti-Christ to the promise of a new heaven and Earth—and she demonstrates an astute passion for her subject. Moreover, she knows that Revelation doesn’t exist in a vacuum, that it is a work that grows out of prophecies from the Hebrew Bible. She does a capable job of blending Old and New Testament references in simple language.

Prince is a competent writer—her lines, in general, are clean and direct—but unfortunately, the book lacks organization and focus. The Revelation Unlocked doesn’t contain an introduction, so there’s no set-up for the reader about what will transpire in its pages. Further, there’s no clear thesis. We can gather from the title that Prince is going to unlock the secrets of Revelation, but which secrets and why? And how is her book different from hundreds of others already written by scholars and theologians, and what is the take away for the reader? These are never addressed and, in turn, the book tends to meander. Lastly, there are no footnotes or list of sources to add authority to the author’s observations.

Prince is obviously intelligent and The Revelation Unlocked is well-intentioned. With revisions it could become a good jumping off point for Bible group discussions.